The Pulse of the Wild- Mary Reynolds Thompson

We came upon it late in the day, after weeks of downpours. My husband and I were exploring the Loop of the Seven Lakes, north of Bariloche in Argentina, when we turned down a deserted dirt road. Mud pools and potholes transformed our rented Fiat into a cross between a bucking bronco and a slalom skier. The road was narrow and tree lined, and though we considered it, there was no place to turn around.

Then, with a final swerve and an intake of breath, Bruce hit the brakes. A breached lake spread before us, swamping the road and what had probably been a parking lot. I opened the car door. Everywhere, light, shimmer, rainbows…and sound. Squawks, whistles and hoots exploded against my eardrums, vibrated through my body like jazz.

I stepped to the edge of the gently flowing water. Hawks hovered overhead and green parrots with red tails swooped by. Upland geese, stout birds that look like a mix between a partridge and a goose, made high growling noises as they waded in the tall, wet grasses. Ibis rested on broad tree branches and yellow finches fluttered like moths among the leaves. From across the lake, as if calling everyone to dinner, a bird made a sound like a tin can being struck with a wooden spoon. The air churned with bird wings and beak chatter. The lake flashed with fin and feather. Music and motion enfolded me.

It hit me then like an ache in the gut: a desire for a time when the entire world teemed with this much life. A time before humans became so powerful that we forgot that we are kin to this Earth—birthed from her body. A time when we knew ourselves as part of an integral community that included the howling of wolves and the great migration of whales.

Once, flocks of passenger pigeons with iridescent wings stretched for hundreds of miles across the sky. Vast herds of elk grazed the coastal prairies. The oceans, replete with leaping fish and diving fowl, frothed like buttermilk. Thick pelts of virgin forests covered the land. Streams flowed so fresh you could dip your hand in and drink from them. The pulse and presence of the more-than-human world blanketed the earth.

It’s not that I think we can, or even should, return to living as indigenous people. It’s not that we can bring back the species that have gone extinct. It’s simply that when I stood beside that remote, overflowing lake, I was reminded of wildness. How it still calls to us, deeply, even in small pockets. No matter what we have done to the Earth, no matter how wounded she is, or how estranged we sometimes feel from her, to love the wild is a ceaseless hunger of the human soul.

Wildness swims not only in rivers and lakes, but in our blood. 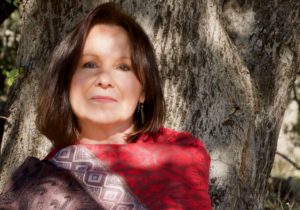 Mary Reynolds Thompson is the author of Embrace Your Inner Wild and Reclaiming the Wild Soul: How Earth’s Landscapes Restore Us to Wholeness. She is also an instructor for the non-profit TreeSisters, a facilitator of poetry therapy and journal therapy, and a certified life coach who has helped thousands of people discover and live their Wild Soul Story. She is the founder of Write The Damn Book, a program that guides writers on the heroic journey from procrastination to publication, and is a core faculty member of the Therapeutic Writing Institute in Wheat Ridge, Colorado.